Warning: session_start() expects parameter 1 to be array, string given in /home/customer/www/germanyinusa.com/public_html/wp-includes/class-wp-hook.php on line 307
 Travel Tuesday – @GermanyinUSA
Skip to content

On the south shore of Lake Überlinger near Konstanz is a place commonly known as “Flower Island”. As the name implies, the 45 hectar island of Mainau is covered in colorful flowers as far as the eye can see, making it an attractive destinations for summertime travelers.

The small island is notable for its many parks and gardens – particularly its roses. The island is home to about 30,000 rose bushes consisting of 1,200 varieties and 20,000 dahlias of 250 varieties. The Italian Rose Garden alone has more than 500 varieties of roses!

It even has an arboretum with 500 species of trees and a greenhouse with a tropical climate and hundreds of free-flying butterflies. The gardens are also home to a peacock enclosure and a petting zoo with ponies and goats.

The island originally belonged to the Order of Teutonic Knights, but it was purchased by the Grand Duke Frederick I of Baden in 1853. Frederick I used the palace on the island as his summer residence. Over the years, ownership of the island changed hands many times. In 1932, under the ownership of Prince Wilhelm, Duke of Södermanland, the island was gifted to the prince’s only child, Lennart Bernadotte, who started a foundation that continues to manage the island today.

Today, the island is open daily to visitors. Travelers who come to the island can relax among a sea of flowers, view the baroque Mainau castle and enjoy views of Lake Überlinger and Lake Constance. 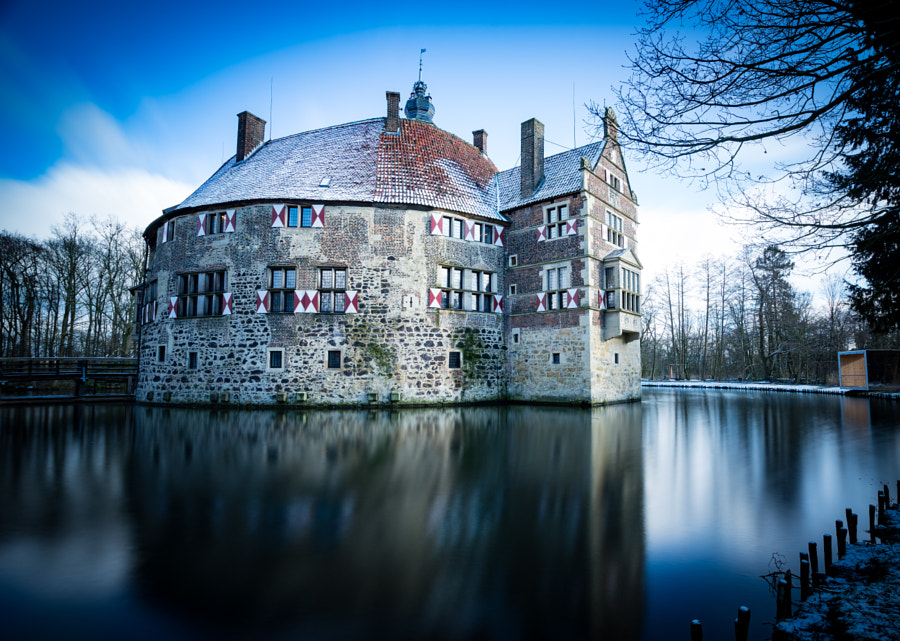 If visiting a moated castle is on your to-do list, then Vischering Castle is the place for you. This German castle takes you on a trip back to medieval times.

The Vischering Castle was built in 1271 and stands in present-day Lüdinghausen, North Rhine-Westphalia – an area saturated with castles. Germans call it a Wasserschloss (“water castle”) because it is surrounded by water for protection.

The castle is a product of a family feud between Bischop Gerhard von der Mark and the Von Ludinghausen family. In the 13th century, the bishop constructed it to compete with the other family’s castle, which was located nearby. Family feuds were common in those days, but they did not always lead to magnificent castles!

The horseshoe-shaped castle was built for defense and still contains its drawbridge, courtyard, strategic gateways and defensive wall. Although it was partially destroyed in a fire in 1521 and partially damaged during World War II, it was rebuilt and continues to stand open to visitors today.